Here are some of the propositions Dr Aligula and the KIPPRA team have offered for improving public transport:

(Listed here as an investment opportunity.)

The Vision: ‘A world class, land-based passenger transport system for the Nairobi Metropolitan Region by the year 2015.’ (Worth noting that the propositions were made in 2004, along with the aforementioned findings/statistics.)

A ‘Think Rail. Use Bus.’ system characteristic is proposed.

The government would require Kshs 227 billion to decongest the city. More on that here.

So, what role could ICT and the previously introduced tech platforms play?

Most of the apps/platforms operate on a ‘name and shame’ reporting mechanism of traffic offenders, un-roadworthy vehicles etc. Stopping at just that would only render the situation worse, especially if the naming and shaming comes with no repercussions. In and of themselves, the platforms would only offer a means, the (ideal)end, just action at this point being theoretical.

Dr. Aligula offered that any tech platform that can accelerate behaviour change on our roads ties in well with the grand picture of the problem and solution.

Other roles listed include data for system planning and management; user-generated data can be collected via most of these platforms. Mobility by route,for instance. Depending on routes that matatu and other PSV users operate on frequently, they could feed these platforms with information as to where they usually get on board/alight from these  vehicles. Such data can be used to plan bus stops for each route, and in the long term alleviate the madness that we have all encountered: a matatu/PSV stopping in the middle of the road to pick up/drop off passengers.

Reducing congestion,vehicle tracking,incident and emergency response are also listed as solutions that ICT can offer. All these apps, in my opinion, are built with this in mind, all that’s needed for the most part is acknowledgment/incorporation by the relevant authorities.

A  March 2012 IBM report cited technology as the key to Nairobi’s development and competitiveness, with transportation as one of the three critical areas highlighted. Said report is currently under government consideration/review. However, the tech solutions have already been thought out, and I most certainly hope that this is not ignored as we forge on. (We invited the IBM consultants who conducted the survey/drafted the report to the event, but they were no-shows as well.)

However, the CEO of the Kenya Vision 2030, Mugo Kibati did pop in and sit in for the presentations, and had this to say:

And made this proposition: 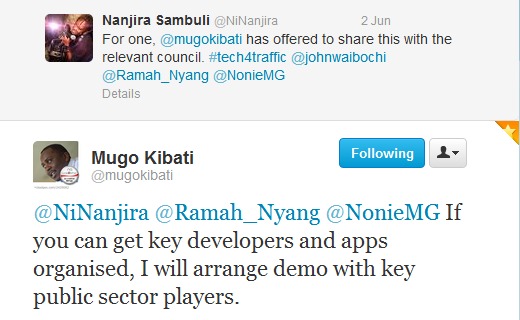 I salute his willingness to facilitate said demo, and we’ll definitely take him up on that.

And to conclude, what can YOU do?

The last 3 posts have seen a lot of information shared. Do interact and familiarize yourself with it, and share it widely. We are all affected by the state of Nairobi roads/transport/traffic, and we could all be part of the solution.

Will definitely keep posting on updates,especially as they unfold. It is my sincere hope that the efforts of these entrepreneurial minds will be incorporated in the solution-creating process.

It’s imperative, in an era of collaborative economies, that we take on our stakeholder positions a bit more proactively. The proposed transit system is just about to be offset, therefore the policies and governing principles are still being finalized. We are a creative,insightful people whose voices must be heard on this side of things.

We also ought to familiarize ourselves with the Nairobi Metro 2030 strategy plan and the department under which it is mandated.

One key lesson learnt is that conversations are a powerful starting point for insight-sharing and exchange of ideas. Beyond that, even those behind government institutions are human beings, who can be drawn out for dialogue and information exchange, not just for criticism.

The organization of this event proved that indeed, online conversations can translate to sustainable offline action. (The genesis of it all is archived here.)

(Many thanks to Ramah Nyang’, Noni Maingi , Bankelele, the iHub team, Sprint Interactive and all presenters/developers, without whom all this wouldn’t have been possible.)