I am indignant, and that may inform the tone of this post. Happy new year, by the way. (Cue track no 9 on the side widget of this post)

Into the meat of things.

In 2010, Prof Anyang’ Nyong’o, Minister for Medical Services was diagnosed with prostrate cancer. Just yesterday, Beth Mugo, Minister for Public Health and Sanitation, ‘defied odds’ and revealed that she too, has cancer: breast cancer. 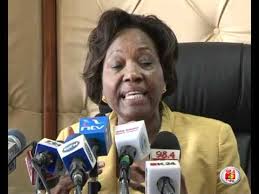 Both ministers received their diagnosis upon going for ‘regular check-ups.’ (How many of us can afford these? Wondering out loud…)Listening to/watching Madam Mugo’s press conference announcing the matter yesterday, I thought for a good minute that I was living in madness-ville!  Now, and I quote.

Question(journo): ‘Why did you go to the US and not here?‘ (for treatment of course)

Response(Hon. Mugo): “No,I think when you have a choice to go…and I think we  have also excellent doctors…uh..here, and who do a very good job, but again, it’s a personal thing and if you have opportunity, then  you choose ..uh…where you want this to happen, but is not that I do not…uh…I do not…uh…I think that they are not …uh…good doctors, we have  good programs here…and also why should I take  the space of somebody else who might not even be able then to go where I went because we only have facilities for so many patients I think I also did a good deed by leaving that space and our oncologists and that bed and everything to support another patient.”

(Yes, I listened to her response on repeat, much to my suffering, to write the above transcript.)

This is what Prof. Nyong’o had to say on the issue of not seeking treatment in Kenya.

“I get some message in the email and in the twitter people saying, well, you know, why didn’t you do it in Kenya. And then they said well, there was no facilities doing in Kenya. But you are the minister….it’s rather cruel because even though you are the minister, you haven’t been minister  since 1900.” (Hon. Nyong’o)

Prof has since launched the Africa Cancer Foundation which targets to mobilize support for cancer patients in Kenya and across the continent. Time will tell what Hon. Mugo does in light of her predicament.

I am no PR guru, and I will overlook the poor sentence constructions/countless grammatical atrocities from these learned ones’ mouths, the stutters and stammers even, but these responses are irritating and anger-evoking,to me at least.[Insert the biggest WTF sign you can find!]

Anyone in PR, you may bow your head in shame, this is a blow to your profession, and an opportunity too, all depends on how you look at it…thank me later.

The bulk of media coverage around these ministers’ situations evokes sympathy, so much so, that you’ll be forgiven for stopping at just that, a natural response to such a diagnosis. It’s encouraging that the journos covering these press releases/interviews asked the gaping question, but that they accepted these responses and left it at that is a whole other issue.

In Beth Mugo’s case, that she was miles away ‘doing a good thing in freeing up space here for other cancer patients’ when this country’s healthcare system was coming apart at its core, and not a word from her, speaks volumes!!! It is alleged that Prof Nyong’o was in the UK giving lectures,then proceeded to the US. Both their offices offered that the ministers were abroad seeking medical attention. Someone say irony! Oh, and Prof. Nyong’o supported hospital staff in their strike that preceded the medical practioners’ one. It’s all here:

Now. I empathize with the lady and gentleman, and their families. I really do.

However, and here’s where I choke on the bile rising up my gut, they are public servants,whose responsibilities loosely lie around upholding and ensuring that every Kenyan accesses(has a right to) ‘the highest attainable standard of health, which includes the right to health care services.‘ (Perhaps I should point out the obvious,themselves included!) Their prerogative to access healthcare wherever they please notwithstanding, what are they informing us about our healthcare system? Even if we don’t  study micro-expressions,body language and speech construction,seeing as we’ve torrented enough series to know a thing or five about behavioural pyschology, they haven’t given a vote of confidence to the system they work for, and that pays them the hefty salaries from which their choice of treatment is catered.

Madam Mugo, I am absolutely appalled that you even think that you’ve done this country a favour by not occupying one more bed at some ward in a hospital. Good for you, that the cancerous cells have since been extracted from your system, and soon we’ll see you hitting the campaign trail,possibly with a clean health slate. Bless you.

Bwana Nyong’o, you haven’t been minister since 1900. Your words. Got it. But you have been in public service long enough to know that yours wasn’t going to be an easy docket. Heck, none of them are. So how is that a satisfactory response as to why you sought treatment from ‘one of the best prostrate cancer centres in the world,with two very well known specialists,a surgeon and a radiologist?’

Kenyan media/journos.Is that all you deduce from these events? Am I reacting too soon? Is there more to this coming my way in this lifetime? That some of you even flew to the US to ‘spend some time’ with the Prof as he sought treatment, and the take-out being the rarity of a public figure sharing such sufferations with the ‘watus’, painting him as an MoP(man of the people) for his weekly articles on some newspaper and leaving it at that absolutely worries me. Is that all there is to the fourth estate these days?

Like I said, this is written from a point of seething anger. I would like to score the best treatment for those in my life who have fallen victim to this menace. I have voted in a constitution that upholds  the HIGHEST ATTAINABLE STANDARD OF HEALTH, but where is that to be found? What does that look like? I’m not implying that the onus of better healthcare falls solely on the two, or their ministries, or their tenures. But if all you expect from me is sympathy and a ‘travel safe’ card as you head off for your next treatment, best believe this is what you get.

The watus. That we soak this scenario in at face value, say a few ‘woishes’ and ‘what the hecks’ and tweet a few ‘SMDHs’, we are a continuing part of the problem. Perseverance is a noble virtue, but only when exercised in the right condition(definitely pulling out the right card at the wrong time!). We are allowing our country and its systems to be a bed of filth that we are lying on a bit too willingly. So the doctors resumed duty, is all well?

Is it sheer coincidence, that ministers in health dockets have been dealt the cancer blow, personally for that matter?

Should we not pursue the possibility that in putting their personal choices first, and pulling no stops at that in seeking treatment ‘from the best’, that it’s a vote of no confidence in the very systems that they claim to be good, but have nonetheless forsaken?

Whatever happened to leadership by example? So Prof Nyong’o has set up the ACF. Is it at the forefront of fighting for better facilities in the country’s hospital wards? Why are we allowing these people to have their cake and eat it too??

As Gramps Morgan asks, ‘how come those with no vision, keep making all the decisions?’

(I’m waiting for one of those auto-tune tracks to Beth Mugo’s silly response above…let’s call out folly as it manifests.)

If we are going to see change around here, we have to let our indignation soar a bit longer. Else, Kenya iuzwe na kila mtu apewe shares ajisort!! (Let’s sell off Kenya and everyone sort themselves out with their share of the spoils.) The ulcers from watching news,night after night, aren’t worth it.

So,dear ministers,your actions have spoken louder than words. So, my actions will in turn speak even louder than these words at the ballot box!