Sensing an opportunity with the G-8 in disarray, China declared 2006 as the “Year for Africa” and convened an Africa Conference in Beijing in October. To feed the voracious appetite of its economic machine galloping at a dizzying 9 percent clip, China was trolling for resources in Africa. It wooed African leaders with euphonious verbiage and diplomatic platitudes about “equal terms” and lofty promises of foreign aid without conditions.

Miffed at the West’s insistence on conditionalities for its aid, 40 African heads of state trekked to the conference and threw themselves at the feet of China, signing a multiplicity of deals.China came up with a 3-Point Agenda for Africa that stressed peace, development, cooperation, and scholarships for African students, among others:(http://bit.ly/MBVqgQ)

China has spent billions of dollars securing drilling rights in Sudan and Angola, and has exploration or extraction deals with Chad, Gabon, Mauritania, Kenya, the Republic of Congo, Equatorial Guinea and Ethiopia. The Chinese have invested in the booming copper industry in Zambia and Congo. They have been major buyers of timber in Gabon, Cameroon, Mozambique, Equatorial Guinea and Liberia. 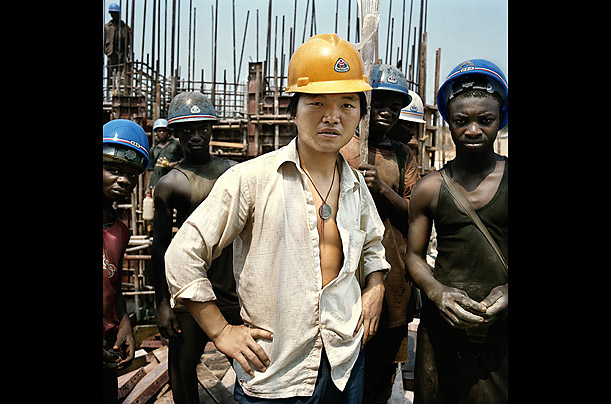 Across Africa, Chinese companies are muscling out Western and other foreign companies, winning contracts to pave highways, build hydroelectric dams, upgrade ports, lay railway tracks and build pipelines — all of which stand to help Chinese companies more effectively transport African resources. Such infrastructure improvements often are explicitly traded for raw material contracts. For example, in Angola, China has promised $2 billion in aid for infrastructure as part of a deal for oil rights.China’s overall trade with Africa rose from $10.6 billion in 2000 to $55.5 billion in 2006, a jump of 40 percent from the previous year, propelling Africa’s growth rate to 5.8 percent in 2008; its best performance since 1974. It has reached $120 billion today.

China is now Africa’s second largest trading partner after the U.S., importing a third of its crude oil from Africa.There is nothing wrong with China driving a hard bargain and pursuing its interests in Africa; all foreign entities do. Increased competition for Africa’s resources should be good for Africa. Furthermore, Africa needs the investment – in particular, to rebuild its infrastructure that has collapsed after decades of abject neglect and destruction from senseless civil wars. According to a World Bank Report (Africa’s Infrastructure: A Time for Transformation, Nov 2009), “the poor state of infrastructure in Sub-Saharan Africa—its electricity, water, roads and information and communications technology (ICT)—cuts national economic growth by two percentage points every year and reduces productivity by as much as 40 percent.” To close the infrastructure gap, an annual spending of $93 billion would be required. Thus, Chinese investment in Africa’s infrastructure ought to be seen as god-sent. But this is not exactly how things have turned out.

The initial enthusiasm that greeted China in Africa has now cooled. “There is mounting objection to China’s deepening forays into Africa” said News Africa (March 2007). Former President Thabo Mbeki of South Africa warned against allowing China’s push for raw materials to become a “new form of neo-colonialist adventure” with African raw materials exchanged for shoddy manufactured imports and little attention to develop an impoverished continent. Rene N’Guetta Kouassi, the head of the African Union’s economic affairs department echoed this warning: “Africa must not jump blindly from one type of neo-colonialism into Chinese-style neo-colonialism ” (AFP, Sept 30, 2009). Some African commentators are less charitable, denouncing what they see as “chopsticks mercantilism,” alluding to the chopsticks dexterity with which China picks off at its leisure platinum from Zimbabwe, copper from Zambia, and oil from Angola, Nigeria and Sudan.

Clothing manufacturers in Lesotho, Nigeria and Zambia complain bitterly of cheap Chinese goods destroying their markets and jobs. In Nigeria, the influx of Chinese products has devastated Kano’s manufacturing sector. In 1982, 500 factories churned out textile products in Kano, but fewer than 100 remain operational today, most at far less than full capacity. Kano’s Kwari textile market, the biggest in West Africa, has swelled with stall after stall of Chinese fabrics and clothing. A decade ago, 80 percent of the fabric sold at Kwari was made in Nigeria, compared with 5 percent now. There are more beggars and other visible signs of poverty in Kano than ever before. It is not far-fetched to link the decline in the textile industry in Kano and the consequent loss of jobs and social destitution to the rise of Boko Haram.

In South Africa, the textile union says some 100,000 jobs have been lost as Chinese synthetic fabrics replace cotton prints in street markets across Africa. In 2007, the unions threatened to boycott anyone selling Chinese products. The backlash against Chinese investments has been particularly strong in Zambia due to workplace accidents, poor working conditions and below-minimum wage pay at Chinese-run copper mines. More than 50 Zambian workers died in a 2005 mine explosion and dozens of others were sacked by Chinese security guards last year. In the run-up to Zambia’s general election in September 2006, the opposition leader Michael Sata made China’s investment in the country a campaign issue. According to Sata, Chinese businesses employ relatively few Zambians. “Our Chinese don’t bring in any equipment or create any sensible employment. In fact, to every Zambian in a Chinese company, there are about 15 Chinese . . . Sata called the Chinese profiteers, not investors, in a country where unemployment is about 50 percent and more than 73 percent of people live in poverty. Chinese investment has not added any value to the people of Zambia,” he charged (The Washington Post, Sept 25, 2006; p.A16).