‘The Obama administration says it is launching a new partnership with sub-Saharan Africa to improve democracy, economic growth, security and trade in the region.’ VOA News.  You can download the U.S. Strategy for Sub-Saharan Africa document here.

African voices have weighed in on this strategy. Below are thoughts by Professor George Ayittey, who sets context, reviews previous US-Africa policies and critiques the current document. These were initially laid out in a series of tweets. (More insights via a twitter chat under the hashtag #USAfricaPolicy) 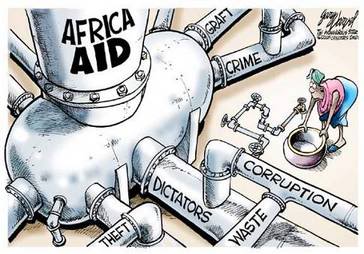 1. How To Help,Save or Develop Africa (Part 1): The Background:

“Over the past 30 years or more, various efforts have been made by Western donors, the international community, international financial institutions and African leaders themselves — ranging from rock concerts to grand initiatives – to save or develop Africa. They all fell flat on their faces because they applied the “Reverse Occam’s Razor.” Convoluted and grandiose mega-plans collapsed under the weight of their own internal contradictions and complexity.” (more…)

2. How To Help,Save or Develop Africa (Part 2): International Efforts.

“Every decade or so, mega-plans are drawn up and rock concerts held to whip up international rescue mission for Africa. Acrimonious wrangling over financing modalities ensues. Years slip by and then a decade later, another grand Africa initiative is unveiled.”  (more…)

“Since 1960, the West has pumped more than $700 billion into Africa with nothing to show for except collapsed states, a multitude of black elephants, decayed institutions and crumpled infrastructure.” (more…)

4. How To Help,Save or Develop Africa (Part 4): China’s 5-Point Agenda

5. How To Help,Save or Develop Africa (Part 5): Africa’s Own Initiatives

“Africa’s Own Mega-Plans. Since independence, African leaders have announced all sorts of grandiose initiatives and mega-plans at various summits. Nothing subsequently was heard of them after the summits: The Lagos Plan of Action (1980); the African Priority Program for Economic Recovery (1985); the African Alternative Framework to Structural Adjustment (1989), the Abuja Treaty (1991) and others.” (more…)

6. How To Help,Save or Develop Africa (Part 6): US-Africa Aid Programs

The U.S., for its part, has also crafted three special initiatives to help Africa since the 1990s. The basic reason why many well-intentioned aid programs came to grief was that the commitment on the part of many of African leaders to put their own houses in order was simply not there. They took the aid money and did the “Babangida Boogie” – one step forward, three steps back, a flip and a sidekick to land on a fat Swiss bank account.

“The responsibility rests with African countries to commit themselves to these objectives and to make policy choices that will enable them to achieve these objectives. Help from outside Africa cannot overcome lack of commitment or wrong choices by the governments of Africa“, President Clinton.  (more…)

Also visit Cheetah Generation: Taking Back Africa ,A Village At A Time